The fork in the road: Overcoming chronic pain through hard work and education 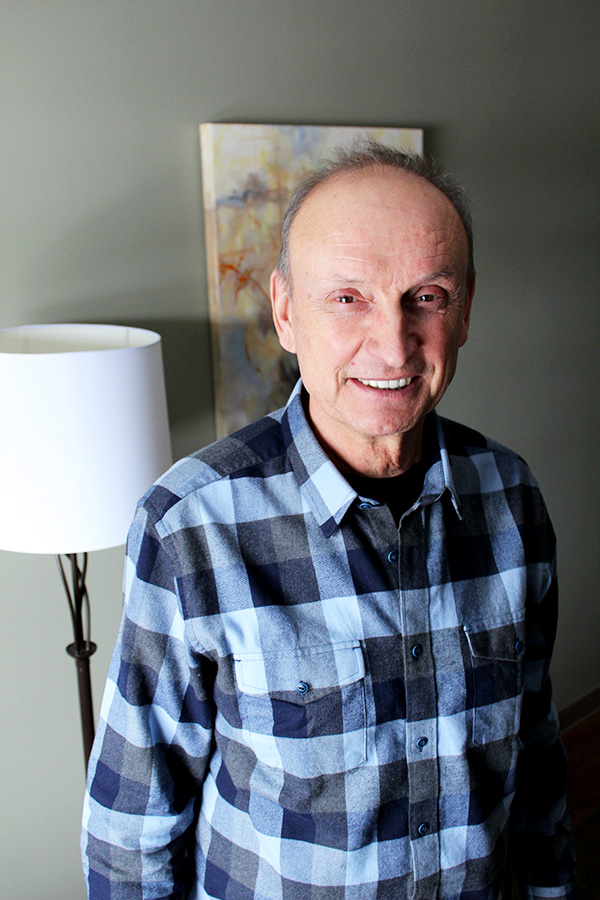 Terry Exell is no stranger to pain. You’d never know it, but Terry, a tall man with a friendly face and a bright smile, has lived for over 40 years with chronic pain caused by a neck injury he sustained at work. And then, in September of last year, he was involved in a train accident that left him with debilitating sciatic pain, as well as damage to his neck, back and knees.

For Terry, an active outdoorsman who lives on a large acreage near Huntsville, this persistent pain threatened to rob him of the things he loves most. To complicate matters, a pre-existing medical condition affecting Terry’s esophagus meant that he couldn’t take conventional medication to relieve his pain.

“The outdoors is always where I want to be. I do a lot of bushwalking and snowshoeing on our property,” he says. “At my lowest point, I could barely do any of it. I just figured ‘Well, it’s been a good run but I’m 68 and I’ve probably had my fun.’ The jig was up.”

Months after the train accident, the treatments Terry was undergoing weren’t working and he was facing invasive knee surgery. It was then that he and one of his specialists agreed he should try physiotherapy.

Terry was not new to physio—more than 20 years prior, it was his physiotherapist, Leslie Tempest, who helped him recover and avoid surgery after his first injury. In fact, he was still doing regular exercises Leslie had taught him during their first encounter more than two decades earlier. So, on the brink of surgery for the second time, Terry knew exactly who to turn to.

“It was a big process and took quite a few visits, but because I had so much confidence in her, I didn’t doubt it for a second. It wasn’t long into it when Leslie said, ‘We’re going to get you back to where you were before the accident.’ And so I believed that.”

Buoyed by her confidence, Terry dismissed plans for knee surgery and braced himself for the hard work of rehabilitation. Together, Terry and Leslie worked through a regimen of physical exercises, pain science education and a rigorous homework routine that Exell embraced wholeheartedly.

Today, Terry is certain that, thanks to Leslie’s support and his own hard work, he’s better than he was, even before the accident. And the real breakthrough didn’t come through an intervention or exercise; instead it came by learning more about how pain works and understanding that all pain is a product of the brain.

“Believe it or not, there was a day I went in—and this is the power of the mind—where I literally hobbled into the office and she sat me down with some big charts and explained how pain thresholds work,” Terry explains. “Honestly, by the time I left that appointment, my knees felt better. I could say that she talked me out of the pain, and there’s definitely truth to that, but there was also a lot of hard work, too.”

Terry says learning more about pain science has been life changing. He no longer fears pain, but instead sees it as a warning from his body, and now he has the tools and techniques to address it before it becomes debilitating. With Leslie’s help, he’s been able to return to his favourite hobbies, like spending hours snowshoeing in the forest, and he can still keep up with his young grandchildren.

“The other day, I had both grandkids on the ice. I was bent right over and down on my knees with the two year old. After the accident, I definitely didn’t think I’d be doing anything like that anymore, so the sky’s the limit now, really. It’s incredible.”

Thanks to the tools and techniques that Leslie taught him, Terry doesn’t expect to find himself in the same dark place ever again. And now he’s doing everything he can to share his learnings with others.

“You have to put yourself out there. I’ve always told my kids, when you come to the fork in the road, take it. And the fork in the road with pain is: let it rule you and it’ll get worse or make the decision to move and learn and to get help. I sure am glad that I did.”

Are you suffering from chronic or persistent pain? Call us at ProActive Rehab today to discuss treatment options and book a consultation: 705-788-1480

Submit
Request an Appointment
Close x
Sending...
Your message was successfully sent. Thank you for your time.
Newsletter Signup
Sign up for Our Newsletter
Close x
Sending...
Thank you for signing up.
You have been added to our newsletter list.
Injuries & Conditions
Sports Activities
Lifestyle Activities
Work Activities
Injury Care
Women's Health Issues
Pain Care
About Physiotherapy
Movement Disorders
We are open for in-person and virtual appointments. Click for COVID-19 info.
See More
X